Prof. Diana Lee shares the results of the survey on sexual harassment to point to future directions for further promoting gender equalities on campus.

Prof. Diana T.F. Lee, Chairperson of the Committee, remarked, ‘After data analysis, there are several observations which can serve as important references for enhancing our policy, publicity and education planning.’

Respondents were requested to express their views on three statements related to gender equality. The one receiving the most disagreement was ‘even if men and women have equal income, men should pay for all expenses when they go out together’, followed by ‘women rather than men should not engage in premarital sex’, and ‘swearing and obscenities are more repulsive in the speech of a woman than of a man’. In general, most of the respondents tended to agree that men and women should be treated equally.

The results also showed that males tended to be affected by the stereotypical gender role of men being dominant and strong, and women, submissive and weak. ‘We ought to reduce gender stereotyping on campus──not only does it exert pressure on both men and women, but it also hinders their personal and career development,’ Professor Lee observed.

According to Professor Lee, even though biological differences between men and women do exist, presuming one’s work ability based on gender stereotype should not be encouraged. For example, it is not necessary to assume that all labour-intensive duties should be carried out only by men and that women are more detail-oriented than their male colleagues.

Respondents were asked whether they agreed that acts such as ‘unwelcome physical contact’, ‘repeated attempts to make a date which is unwanted’, ‘sending e-mails, messages from online social networks, phone calls, letters or faxes which are of a sexual nature’ are sexual harassment. The results showed that men in general shared a more lenient attitude towards sexual harassment.

When asked for their views regarding seven misconceptions on sexual harassment, the respondents tended to disagree with all of them, though gender differences in all seven statements were statistically significant. The results showed that male respondents were more inclined to believe that sexual harassment was only a result of exaggeration, misunderstanding or over-reaction.

Professor Lee said, ‘It is obvious that, when it comes to the definitions and views on sexual harassment, male respondents are less certain. The findings suggested that we have to put more emphasis on the education of gender equality.’ Recently, the Committee co-organized a ‘Gentle Men Youth Ambassador Scheme’ with Anti480, which aims at enhancing the understanding of gender roles and personal development, re-considering the image of ‘men’, and discussing related gender issues through experiential learning.

Don’t Keep It to Yourself

A great majority (91.8%) of the respondents indicated that they had never experienced sexual harassment on campus, while 8.2% confessed that they had. Among the latter, 26.2% had ‘confronted the harasser’. Most respondents (51.8%) tended to adopt an evasive attitude by trying to ‘avoid contact with the harasser’, e.g., by skipping classes, changing courses, or transferring to other departments.

‘It won’t help,’ said Professor Lee, ‘the harassers will take avoidance as forgiveness to their advantage and will continue their offensive acts. Tell them boldly that their actions are unacceptable and order them to stop their misconduct immediately; that’s the way to solve the problem.’

‘When one feels one has been sexually harassed, one should immediately talk to the people he/she most trusts, such as a family member, a close friend, or seek help from the Committee. The Committee will help determine whether the action in question is considered “sexual harassment” and offer ways to tackle the issue. Keeping a written record of the incident in detail will be useful for filing complaints and for future investigations’, Professor Lee added. If the victim does not want to report the case to the University, he/she can also look for help from the Equal Opportunities Commission, or take civil action in the District Council. Most importantly, don’t keep it to yourself.

Among respondents who had experienced sexual harassment, 9.9% indicated that they had reported their cases to their supervisors or the University. 33.3% of them indicated the supervisors had talked with both parties concerned in order to have a better understanding of the case, provided or suggested counselling services and referred the case to the Committee.

Professor Lee emphasized that supervisors and heads of departments have the responsibility to communicate the University’s policy against sexual harassment clearly to their colleagues, as well as to raise the awareness against sexual harassments among them. They should act upon a complaint promptly and seriously. ‘If anyone has the courage to take a step forward and ask for help, the way the management responds to the situation is crucial. We have uploaded specific guidelines on the website for supervisors and managers, indicating their roles in preventing sexual harassment and the procedures for handling the issue. We hope that supervisors can show as much understanding and support to the complainants as possible.’

Respondents who had ‘browsed’ and ‘heard about’ the University’s policy against sexual harassment were 21.4% and 42.9%, respectively; while 35.6% of them ‘haven’t heard about it’.

‘Almost half of CUHK members are aware of the University’s policy against sexual harassment──an encouraging figure to show what we did in the past had been effective. But we still need to work harder, as about one-third of them have never heard of the policy. The ultimate goal is not simply to get more members of the University to learn about our policy, but to promote the values of gender equality and mutual respect, as well as to ensure a safe environment on campus, where everyone can realize their potentials and be free from the threat of sexual harassment,’ Professor Lee remarked.

Details of the survey findings can be found in the Committee website.

This article was originally published in No. 475, Newsletter in Apr 2016. 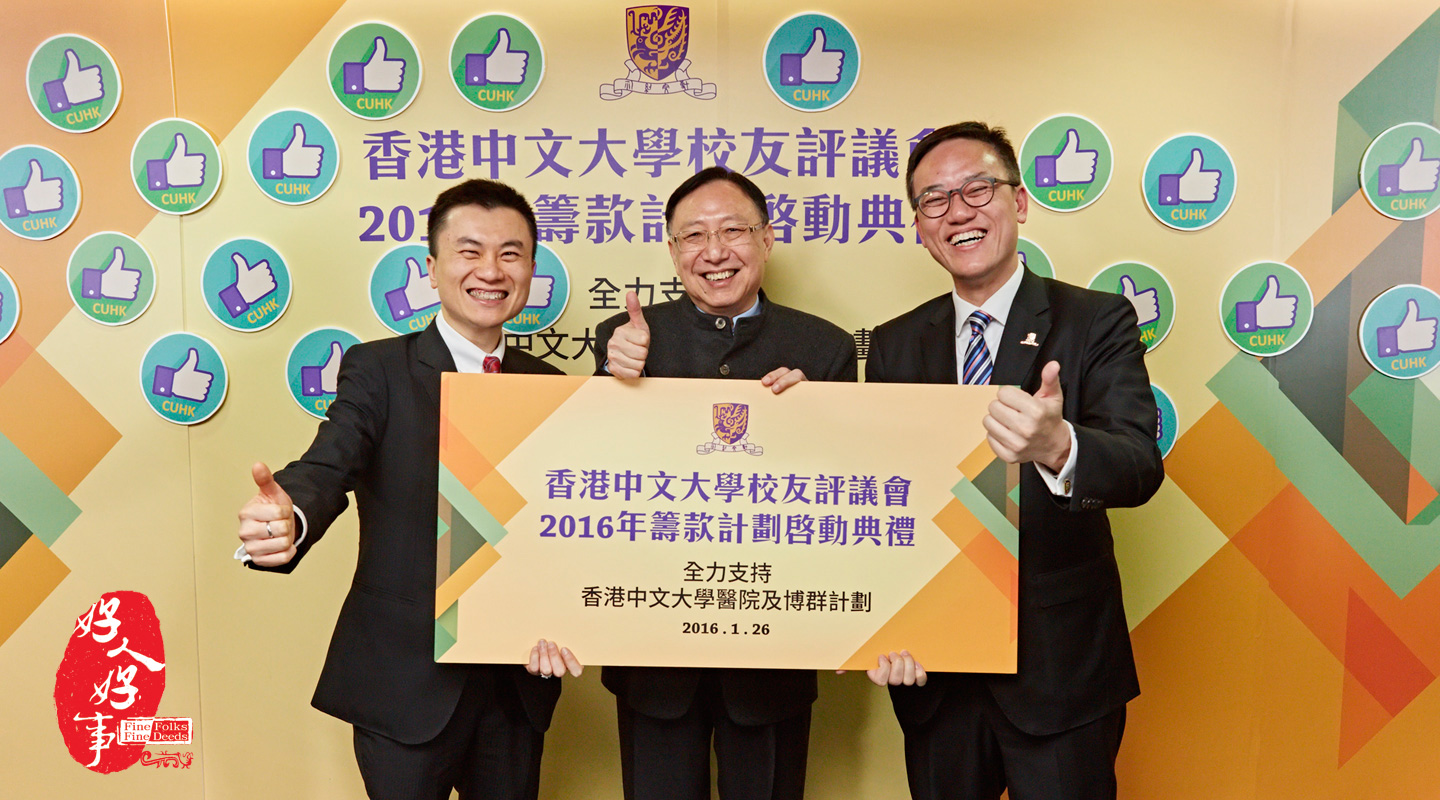 It's Up To Me and You

Three alumni-cum-fundraisers talk about the role played by the CUHK Convocation, and what makes giving to their alma mater a meaningful thing to do. 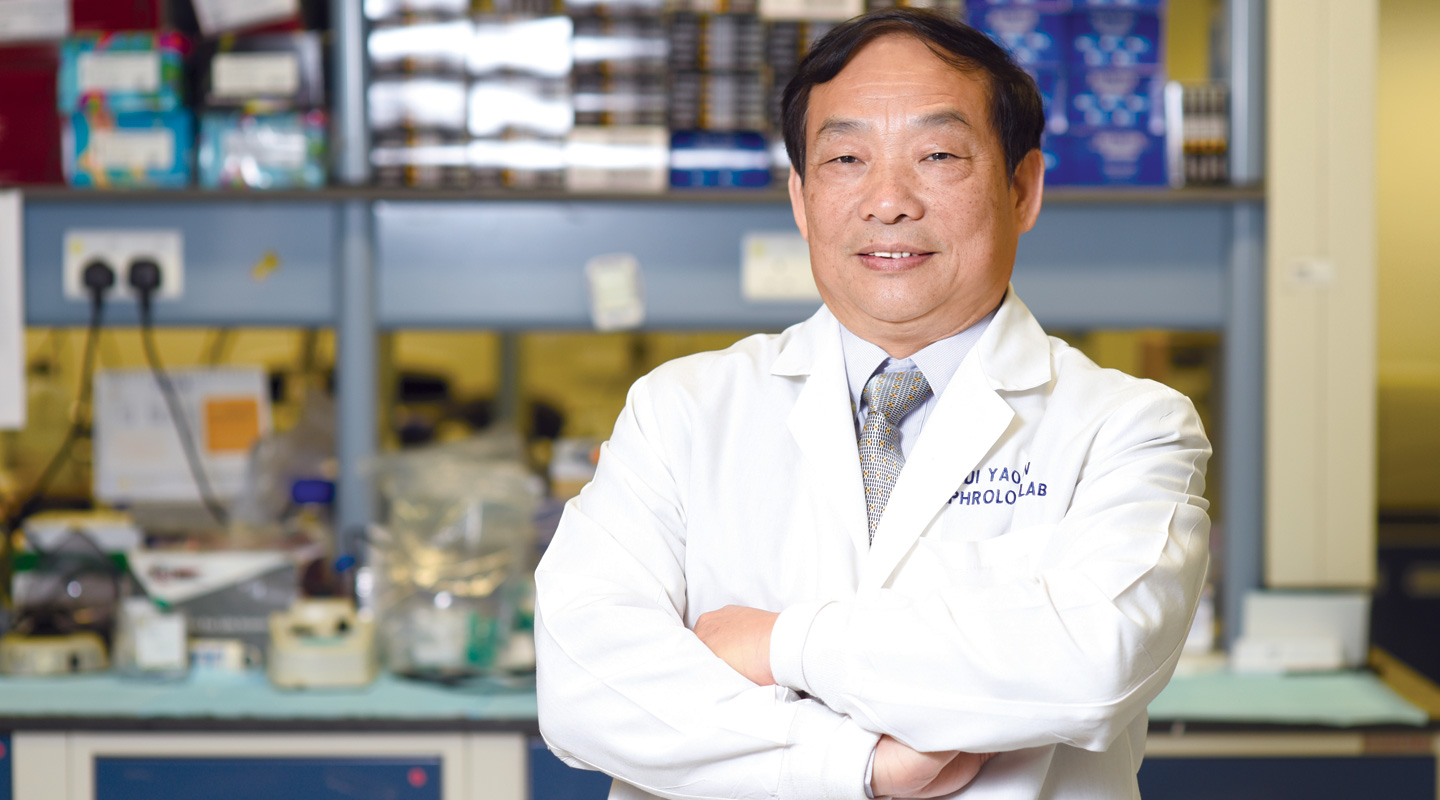 Prof. Lan Hui-yao expounds on how he applies the yin-yang balance theory to uncover the mechanism of renal fibrosis.

From #MeToo to #Respect
United We Stand, Together We Rise