‘The rain will stop, the night will end, the hurt will fade.
Hope is never so lost that it can’t be found’

There are innumerable difficulties posed in life that make everyone weary and enervated: you have to stay awake for a few more hours till your graveyard shift ends; you got diagnosed with health issues that require ongoing medical attention; your relationship with your high school sweetheart isn’t working out and is now losing sparks; your business is failing; your grades are suffering; and you feel like life is going nowhere at all.

Sometimes, it seems like life can be anything but miserable and cruel.

Yet everything in life is fleeting and impermanent. Just as Hemingway has put it, every time it rains, it stops eventually; and every time you get hurt, you heal eventually. After darkness there always comes the light—we just have to wait to see it.

‘You might think the pain will last forever. It won’t. It definitely won’t,’ said Ginenus Fekadu Mekonen, a second-year Pharmacy postgraduate. ‘No matter how much it hurts, hold your head high and convince yourself to keep going. Focus on your goals and dreams, and survive.’

The interview with Ginenus was a special one, partly because it was conducted three hours before the Hong Kong Observatory hoisted the T8 warning signal, as tropical cyclone Kompasu was moving closer to Hong Kong. Despite a raging tempest on the horizon, this didn’t stop him from attending the interview; quite the contrary, this was the perfect moment for him to share his tales with the rest of the world.

The story begins in a faraway village located in the quiet parts of Western Ethiopia. Ginenus was born in Horro Guduru, Oromia region, and lived with his family in a rustic hut made from mud and dried grass. Like most folks that live in rural Ethiopian areas, his village has no access to electricity and clean water, and, therefore, Ginenus spent most of his childhood days in nearby forests where he foraged for fruits and firewood.

‘My father was badly injured in a serious accident and a large portion of our savings was spent in treatments and medications, so naturally I had to step up and become the breadwinner of my family,’ he recalled. At the age of five, Ginenus had already been working as a farmer, ploughing the lands and trying his utmost to put food on the table. ‘Still, we spent most of the nights with empty stomachs in bed. The hunger pangs were sometimes excruciating, so much so that they made falling asleep an ordeal to go through.’

In spite of the heavy responsibilities and immense hardships, Ginenus insisted on going to school, trekking over seven kilometres daily and walking an hour and a half barefoot in order to reach the destination. The experience was definitely a dolorous one—there were cuts and bruises all over his body, blisters popping up here and there, and blood oozing out of his legs and feet profusely as he trudged through the rocky terrain in order to make it to school.

‘It was worth all the hassle, though,’ Ginenus pointed out. ‘In Africa, the easiest way to get out of penury is to land yourself a high-profile job—doctors and engineers in particular—and to do so, the very first step is to pass all of the school exams with flying colours.

‘I know I have to continue my education in order to do my family good and break the cycle of poverty. This is the only way for me to change my fate.’

To say he was a smart student is certainly the biggest understatement of all times: far-sighted and remarkably sagacious, Ginenus was the crème de la crème and literally the country’s top-flyer, always snatching first in classes and even scoring a perfect GPA of 4 out of 4 in the Grade 10 Ethiopian national examination.

Just when things started to look up and had finally turned the corner, everything plummeted into chaos after that fateful night when he had just finished his first semester of Grade 11 and was heading for home. ‘There was quite a political upheaval back at that time. Many were falsely accused and charged with crimes they didn’t commit. I happened to be one of them,’ Ginenus recounted. ‘I distinctly remembered there were about 70 federal policemen standing at my door, accusing me of involving in a certain protest that I didn’t participate. I was then imprisoned and thrown into a dark chamber for two entire weeks.’

And that wasn’t even the toughest row to hoe in his life. Shortly after finishing his university entrance exam at the end of Grade 12, Ginenus was arrested again for something he didn’t do. What led to his arrest this time, however, was something he couldn’t fathom or foresee.

‘Someone I know, somehow, had reported me to the authority, telling the police that I had actively spoken out against the government and should thus be incarcerated.’

‘Any idea why they did this to you?’ I couldn’t help but ask.

‘Let’s just say the most sinister parts of human nature can manifest themselves in times of dire poverty, be it greed, envy, and grudge… but what hurts most is to see how people can betray you in such a heartless way…’

Ginenus paused, struggled for words for a bit, and continued with teary eyes. ‘I couldn’t hold back my tears when the court adjudicated that I should be imprisoned for seven and a half years. I tried to remonstrate and appeal for my case, only to be ended up with four more extra years in prison—the judge ruled that this was an act of contempt and should warrant punishment.’

Life in prison is as hard as it is, but for many prisoners in Ethiopia, this life is made even harder by the living conditions behind bars. ‘Hundreds of prisoners were put into a single poorly ventilated cell and many of us were forced to sleep on floors. Tuberculosis, pneumonia, fleas and lice were common problems in prisons, too.’

For the first few months, Ginenus felt like it was the end of the world; he had lost all hope and cried himself to sleep every night. Nevertheless, he suddenly found the meaning of his life one day. ‘My mom is still waiting for me outside and my dad needs someone to take care of him. Things cannot end like this!’

And then he remembered: there was still a trump card that he could play at this very moment.

Ginenus immediately bounced back to life and, after beseeching the prison officers times after times, was transferred to the Eastern Wollega Nekemte Correctional Center—a prison facility that is situated next to the Wollega University (WU). ‘God has gifted me a talent in studying and I mustn’t put it to waste. I must continue my education and do whatever I can to get myself out of here.’

With the support of various inmates and officers, Ginenus successfully registered as a full-time student in WU, studying at eight in the morning and returning to prison for work at five in the afternoon. This was also the time he realized that every cloud has a silver lining. ‘There was this prison commander that helped me through and through, writing letters to WU, begging them to enrol me as their student, and secretly assisting me to finish my education. He said to me, “Though things may not work out in the end, you should still try; if you don’t, you cannot change anything.”’

Studying by candlelight for only an hour or two every day, Ginenus went on to accomplish the impossible, scoring, again, a perfect GPA of 4.0 (6A and 2A+) in his first semester. Providentially, there was also a pushback against the government from the masses and courts began to review cases which were suspected of foul play or dubious rulings. Given Ginenus’s model behaviour at campus and conduct in prison, the court reopened his case and by the end of the second semester, Ginenus was found not guilty of the previously charged crimes.

After everything he went through, Ginenus is free at last.

Life has never been better after Ginenus left prison—apart from reuniting with his family and devoting himself further to the academic, he had also reconnected with society and involved himself actively in extracurricular activities, joining numerous university clubs and founding Generation for Generation Charity, a nongovernmental organization that assists children of all races and religions in education, medical care and subsistence.

‘So what makes you decide to study abroad and choose CUHK for your postgraduate studies?’ I asked.

‘For one, CUHK provides programmes that are best suited for my field of interest and I heard that research experience and education provided here are top-notch. But more importantly, regardless of your background and past, people at CUHK are willing to listen and give everyone a chance to shine. This is something you don’t normally see.’

Unsurprisingly, Ginenus has kept himself busy once he started his studies in CUHK. Under the supervision of Prof. Joyce H. S. You, he is currently working on a project pertinent to interventions and management tactics on tuberculosis . He is also a devoted member of the CUHK staff football club and a global ambassador of CUHK, passionately connecting the campus with other African universities for collaboration opportunities.

‘CUHK has the infrastructure and talent whereas Africa has the resources and potentiality. If we establish a link, it provides a fantastic opportunity for both parties to benefit from knowledge sharing,’ Ginenus explained.

By the end of the interview, Ginenus showed me photos he took at different stages in life (some of which are now published in this article). There is, interestingly, a common thread in all these pictures—no matter when or where the photo was taken, there is always a smile plastered on Ginenus’s face.

‘How did you do it? The smile, the positivity, everything?’ I gave my last question to him.

‘Everything in life has two contrasting sides—sadness and happiness, ugliness and beauty, treachery and faithfulness, to name but a few. It all boils down to which side you opt for and ultimately choose to live with.

‘Of course you can choose to cry your heart out when you are down in the dumps, but don’t forget that you can also go the distance and walk through hell with a smile. After all, at the end of the day, the only person who can help yourself is you.’

By ronaldluk@cuhkcontents
Photos by Eric Sin 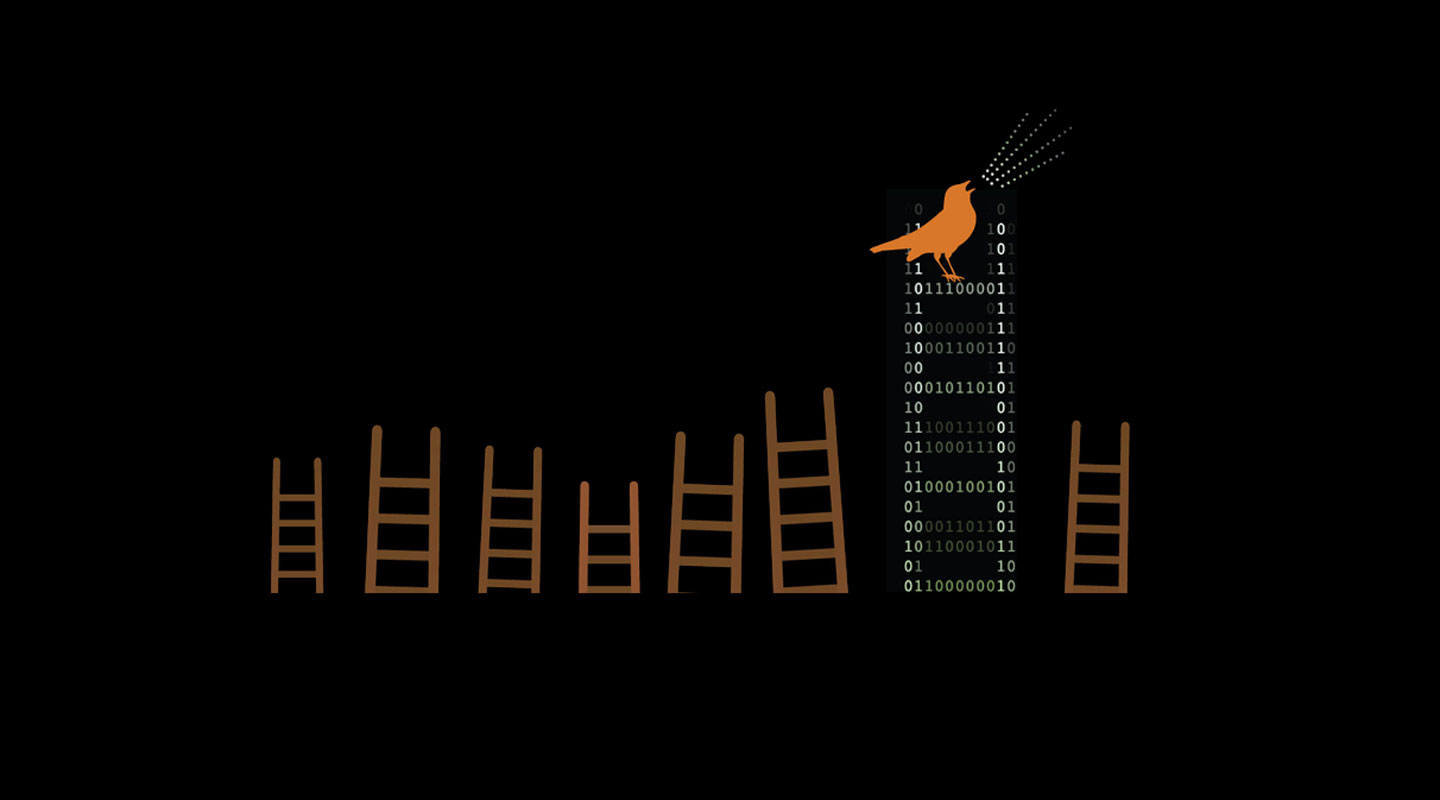 What AI does for art—and what it doesn’t